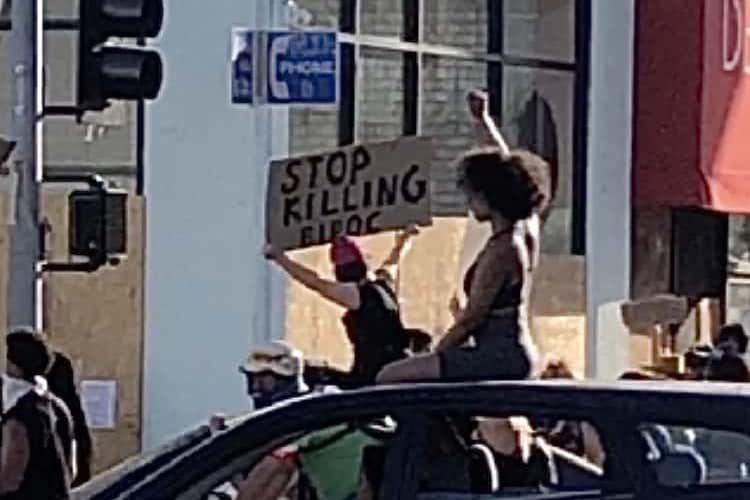 I’m going to preface this by first saying, I am a black woman in the music industry with a fairly logical mind. Yet days after the fact, I am still clueless as I try to decipher the riddle that was Blackout Tuesday. Was it a boycott of the music industry, or of music? Of social media, or just Instagram? Were we supposed to speak up or be quiet? Start a conversation, or just listen? Don’t get me wrong, I think the sentiment was there. I think the idea was mostly there, and the intention most likely good. But I think the mark was missed. Here’s why:

Though, hashtagging #BlackLivesMatter was probably well intentioned, it seemed to serve more as a method of obscurity for most of the morning, pushing the page’s content into the depths of black square void…preventing all information from being seen, and essentially blocking the spread of awareness. To remedy this, Instagram memes started showing up (mostly posted by black people) asking those on their feeds to please remove the #BlackLivesMatter tag from the black square posts, because they were not helping. All this asked very apologetically, as if to say, ‘I’m sorry for seeming ungrateful, because I really am grateful, but, please, remove the hashtag.’ This was followed by an additional apologetic plea just a few hours later requesting that the #blackouttuesday hashtag now be removed as well, as it had succeeded in merging with #BlackLivesMatter and was creating the same dilemma, obscuring all crucial information from being seen. This time with the apology and expression of gratitude, came specific instructions of what to do to help: numbers to call, businesses to support, organizations to donate to, etc.

This, I just couldn’t wrap my head around. For me, solidarity with fellow human beings should be a given, not a favor. Hasn’t this been the actual point of the protests? Isn’t this the very purpose of #BlackLivesMatter? It isn’t the responsibility of black people to educate white people on how to be human toward fellow humans. It felt awkward to have to offer apology, explanation and guidance while simultaneously protesting for justice and equality, in the midst of mourning the loss of another black life. At best, it frustrated, and possibly even silenced those who were genuinely trying to show solidarity, because naturally, people want to right the wrongs. And no one wants to do it the wrong way. Especially now. Because, everyone… black, white, American, International…everyone… is outraged over George Floyd’s death. So yeah, it may have been well intentioned. Just not well executed.

My biggest issue, however, was with #theshowmustbepaused. This stupefied me. In my experience, both as a black woman in music, and as an appreciator of it, music has been the only thing that has ever truly bridged the racial divide. I remember as a kid growing up in a particularly racist neighborhood in Long Island, New York, I was a n*^%@r, a zebra, an oreo cookie at the bus stop, but in the school orchestra with my cello, I was not only respected, but needed. And appreciated. At home, my parents, who were jazz musicians, played the music of John Coltrane and Charlie Parker, Miles Davis and Thelonius Monk, to name a few. All were black artists who, in a time of racial segregation, were releasing albums that were being consumed by ALL races, playing to sold out shows that were being attended by ALL races, whilst having to enter through a back door to play them. These masters of a genre created by black people, were opening the doors of perception and understanding at a time when they were still considered second class citizens. And jazz, which was borne of blues, led to rock and roll, which led to funk, which led to R&B, and hip hop. And here we are today, at a place in music that black people, for the most part, led us to. All genres, now, not only created by all races, but appreciated and consumed and cherished by all races. So why did the music industry call for a day of silence?

I understand that the intention may have been for reflection on the events taking place, and to allow space for black voices to be heard. And maybe it was even to send a message throughout the industry to treat a people LARGELY responsible for the actual existence of the industry, with justice and equality. I get that. But to me, it seems a more logical way to have achieved this show of support and solidarity would have been to black OUT (as in expose) Black Tuesday by celebrating the music created by black people; heighten consciousness by making only black created music available for purchase; playing only black created music on the radio and other platforms. What better way to hear the black voice than to actually hear a black voice? How better to reflect on the events taking place than to listen, by way of song, to the oppression, the pain, the struggles, the injustices, the love, the heartbreak, the hope, and the faith of a people who continue, to this day, to be misunderstood and feared, and… targeted. What better way to reflect and begin to truly understand the outrage we feel, the outrage that caused these current protests, than to have the soundtrack that tells the story playing in the background? From where I stand, and for what I need right now,

this would have been a truer show of support and solidarity than an endless sea of branded black squares.

So what did I do?

I flipped it. I posted my black square, first with a message that although I didn’t really understand the point of the initiative, I wanted to show my solidarity as a black person in the music industry and so stated that music, in my experience, has been the only thing that has broken the race barrier. Dutifully, and mistakenly at first go around, I added what I thought to be the appropriate hashtags. After learning of their detriment, I quickly removed them, just like everyone else. But then, in a moment of what felt like razor sharp clarity amidst a fog of confusion over the initiative itself, and the din of chaos occurring outside my window in Hollywood, I knew exactly what to do. I posted another black square. This time, as an IGTV post, still with a statement that I didn’t quite get the point, but, this time suggested that perhaps a better way to show solidarity from an industry that was LARGELY made possible by black people, was to play the music of black people, truly allowing our voices to be heard. With no hashtag, I added a soundtrack and prefaced it with: So HEAR goes…and attached a Mos Def song. Fear Not Of Man.

Did my Eureka moment help anyone else gain clarity? Who knows? At the very least, though, it helped me gain some insight while also giving the very puzzling initiative that was #blackouttuesday some true meaning. It may have even lit a fire in me to continue posting black created music every week to ensure that our voices are heard after the outrage subsides, and the quiet returns. And for this inspiration, ironically, I actually do have #blackouttuesday to thank. Though, I think if I start a movement, it will be without hashtag.